One of my old church friends sent me this text message inviting me to a talk on euthanasia: 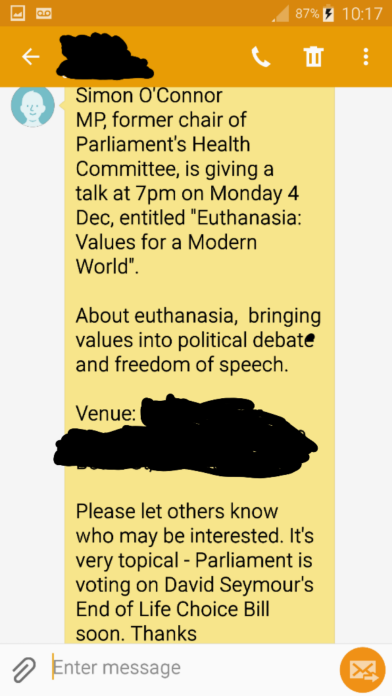 This intrigued me because I wrote about this topic not too long ago. Was this event gonna be pro-euthanasia or anti? Who is Simon O’Connor? Oh THAT Simon, the politician who equated euthanasia to suicide. I’m not sure I am going to enjoy going to that talk… Since the recent NZ election, he retained his seat in parliament which suggested he did quite well for himself. Being optimistic, I would like to think he got lots of votes DESPITE his ignorant anti-euthanasia stance and Facebook rant. But who knows? After the backlash he received, including from me, he wrote an editorial on an upcoming euthanasia bill and why he doesn’t support it.

After reading Simon’s editorial, I’ve got the impression that maybe Simon isn’t such a jerk after all, but just terribly misguided. Firstly, he makes a straw man argument by essentially calling euthanasia ‘assisted suicide’ from the start, which isn’t true. Secondly, he says that NZ isn’t a collection of individuals but we are a society where each of our actions affect the others. While you can say that is true, he uses this to build on his ‘assisted suicide’ argument to explain how it would negatively affect other people. Actual suicide does have negative consequences on family members and friends after all, but it is not euthanasia! If someone is terminally ill or in a vegetative state, would their friends want their suffering prolonged by keeping them alive? There is no easy answer to that general question, but it’s certainly not the same as a perfectly healthy individual taking their own life. Finally, I noticed Simon mentioned he spent nearly ten years training to be a priest. This random piece of information is important. A large chunk of the people opposed to euthanasia, including my friend, are Christian. Much like abortion, it seems to be a religious issue, but many non-religious reasons are used to try and justify their viewpoint. Since ‘euthanasia is bad because God says so’ doesn’t cut it anymore.

I didn’t end up responding to my friends text because I didn’t want to go to this talk, but hey it could’ve been interesting meeting a guy who I criticised on my blog recently (in hindsight). My friend is lovely but let’s say we agree to disagree on a lot of things (whether they know it or not).

Update: The Euthanasia Bill (known as End of Life Choice Bill) has passed its first reading.  The outcome was decided by a ‘conscience vote’ of MP’s who voted based on their own personal beliefs, irrespective of what the public has to say. 76 voted in favour while 44 voted against. Because the bill passed its first reading, the public will have a say in a referendum later on – which I think is good news.